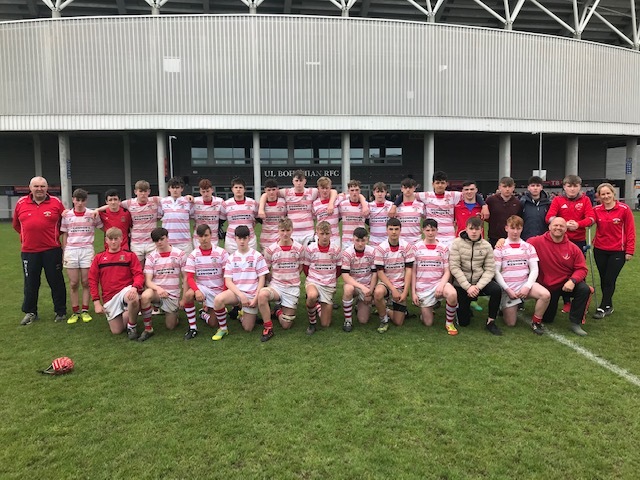 The final juvenile match of Nenagh Ormond’s season took place on Sunday last. After the disappointment of losing the semi-final of the Munster Club Competition, our Under 16’s picked themselves up, worked hard in training and put in two strong performances in their quarter- and semi-finals to book their place in the North Munster Cup Final against Young Munster in Thomond Park. When these two sides met in the first half of the season, Nenagh came out on the winning side of a very tight scoreline so, while they went into the match with plenty of belief, they knew that it would be a tough test.

The first half proved a frustrating one for Nenagh as they literally did everything but score. They had the vast majority of the possession and, although they put together some great rugby and their effort could not be faulted, they just couldn’t get over the line. However, when Young Munster turned over the ball well inside their own half Nenagh just didn’t react quickly enough and the Limerick side ran the length of the pitch to score. A brave blockdown of the conversion by Number 8 Thomas Lillis kept the score at just 5 points but the Nenagh lads were understandably frustrated and determined to score next. That score looked possible when, with around ten minutes to go to the break, Nenagh won a penalty. Although it was quite a distance out, James Finn stepped up to take the kick and was very unlucky, the ball sailing just left of the posts. Nenagh kept working and they had several chances, with Adam Cleere making some good breaks and Liam Cooney tackled in to touch just inches short of the line, but at half time the 5-0 score still stood.

When Young Munster scored five minutes into the second half to go 10-0 up, the Nenagh supporters could have been forgiven for thinking it was all over. Having had the lion’s share of possession and having worked so hard for no reward, it would have been easy for the Nenagh lads to drop their heads and say it just wasn’t their day. However, as we have seen on many occasions this season, these lads just don’t know the meaning of the words ‘give up’ and adversity just seems to strengthen their resolve. When they won a penalty they opted to kick to touch and from the resulting lineout inside Young Munster’s 22 they set up a maul and drove their way towards the try line. The maul went to ground but scrum half Andrew Ferris, who played superbly throughout, spotted a gap and picked and went over. Finn converted to narrow the deficit to three points.

Nenagh sensed a swing in the momentum and they took advantage, led by captain John Brislane who carried and tackled hard and whose breakdown work was second to none. Backs and forwards now all rowed in together with Tom Kennedy and Darragh Tucker working particularly hard in support and linking well with the backs. When Nenagh got inside the Young Munster 22 they were determined not to leave without a score and eventually quick hands got the ball to fullback Adam Cleere who touched down in the corner to put Nenagh two points ahead.

However, minutes later Young Munster burst through Nenagh’s defence to score under the posts and the conversion followed leaving Nenagh trailing by five points. This made for a very tense finish to the game with both teams, despite very tired bodies, showing massive determination and leaving absolutely nothing on the pitch. The last play of the game arrived and, all credit must go to the Nenagh lads, it found them camped on Young Munster’s try line. After some hard yards by the forwards, Ferris again saw space and he slipped through and over the line. Unfortunately, the ball was deemed not to have been touched down and the final whistle was blown.

This was a tough end to what has been a very good season for our Under 16s. We have had great results and there have been some excellent performances but, most importantly, every player has developed their game and there has been massive improvement in the team as a whole. Thanks to all the parents, family members, friends and club members who came to cheer us on, your support was greatly appreciated.

The coaches would like to say well done to the players who are always a credit to our club wherever we go and we are extremely proud of them. A special word to the players and coach Mike Storey who joined us this season from UL Bohemian, Ballina and Newport. As well as being a huge asset to us on the pitch, we have also become great friends and you will always be welcome at Nenagh Ormond. We would also like to say a huge thank you to all of our parents who again this season have been very supportive. We hope to see you all again for the 2019-20 season!

Nenagh Ormond RFC would like to pass our condolences to t...

This week's Nenagh Guardian features a reminiscence of Ne...