Opening win for U-13's in Bruff 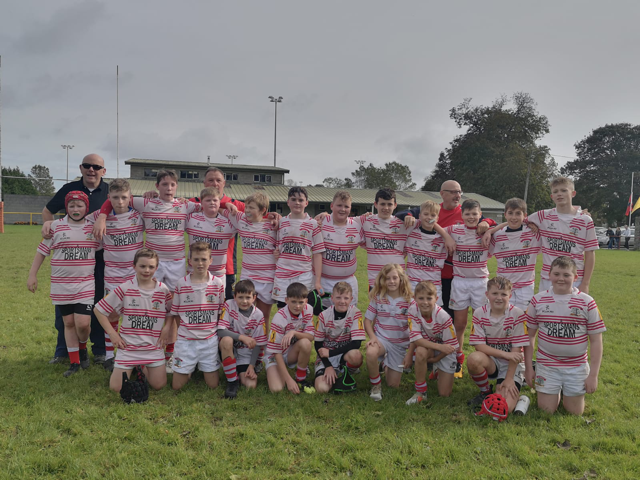 Nenagh Ormond R.F.C. under 13's played their first ever competitive game in a League fixture away to Bruff on Sunday last.

In a picturesque setting and on a beautiful day for rugby Nenagh got off to a great start when some strong running by the back row created space for debutant Cillian Lewis to burst through the centre for a great try. The conversion was unsuccessful.

Nenagh kept up the momentum and after some strong carrying by the forwards, hooker Jack Casey went in under the posts. No. 10 Cillian Healy slotted the conversion to give Nenagh a deserved 12 point lead. Bruff rallied and camped in the Nenagh half for a period. Good Nenagh tackling kept the hosts out and after a penalty was awarded the Bruff kicker slotted the kick to make the score 12-3 to the visitors.

The momentum was with Bruff early in the second half. Nenagh defended manfully but after a sustained period of pressure, the big Bruff no. 8 drove over. The conversion was short.

Nenagh finished the stronger and saw the game out deep in the Bruff half.

All the Nenagh lads can feel proud of their performance. The smaller Nenagh pack dominated their bigger opponents for most of the game, with the back row of Jack Ryan, Joe Grace and Emmet Jones driving their runners back time after time. Jack Casey had a fine game at hooker with excellent phase play and a great try as well.

Billy O'Brien and Cillian Healy were calm and controlled at half back, with captain Brehon O'Donnell tackling like Bundee Aki in the centre.