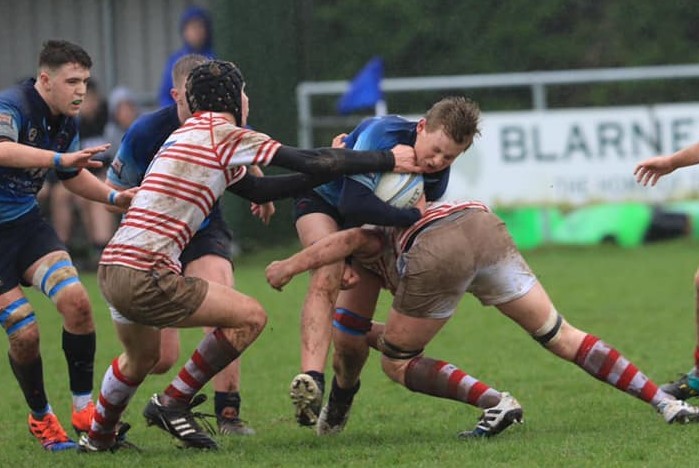 Nenagh Ormond under 18’s extended their 100% Munster Cup campaign to 3 wins with a comfortable victory over Muskerry in group 3 last Saturday.

Having won their opening games against Listowel/Tralee and Waterpark at home, Nenagh made the long journey south to county Cork and continued their good form, outplaying their opponents for the majority of the game and scoring six tries to a single reply. For the second week running, Nenagh received the ball from the kick-off and went on the offensive immediately, dominating the early possession and taking less than 5 minutes to get on the scoresheet. Scrum-half Peter Rainsford pounced on a loose ball from a Muskerry scrummage close to their line and from the resulting ruck, prop Cathal Delaney dived over for the game’s opening score.

After such a promising opening, it seemed that Nenagh might dominate however the home team enjoyed a good period of possession in the opening 20 minutes, particularly through their excellent lineout. Although never quite looking as they would breach the Nenagh line, Muskerry certainly had their moments where they looked dangerous only to be met by solid defence, with second rower Eoghan Slevin leading the charge with some shuddering tackles.

With 20 minutes on the clock, Nenagh engineered a turnover from a good counter-ruck in the middle of the field and moved the ball quickly to the left wing where centre Conor McMahon handed off the last defender to touch and then convert to bring the margin to 12 points. Five minutes later, flanker James Meagher was rewarded for his tireless support play when he took an inside pass to touch down unopposed under the posts and put further daylight between the teams. The home team’s cause was not helped by a penalty miss from straight in front of the posts just before half time and they remained scoreless at the interval, carrying a 20 point deficit into the second half.

Nenagh started the second period as they had left off and with the game now swinging very much in their favour, Conor McMahon took advantage of weak defence to score his second try wide on the left. When centre James Finn touched down 5 minutes later, the game was well and truly over as a contest with the score now standing at 32-0. Having spilled the ball with the line at his mercy in the first half, full back Kian O’Kelly made amends by powering past a number of defenders to touch down in the corner for Nenagh’s sixth try with 10 minutes remaining. It would have been understandable if Muskerry had thrown in the towel however to their credit, they kept trying to the end and were justly rewarded with a consolation try in the corner at the death having previously come close on a number of occasions.

With the game between Listowel/Tralee and Sundays Well postponed due to the weather, Nenagh now move top of group 3 and will attempt to keep their 100% record in tact against a strong Sundays Well team at home on Sunday 26th January.