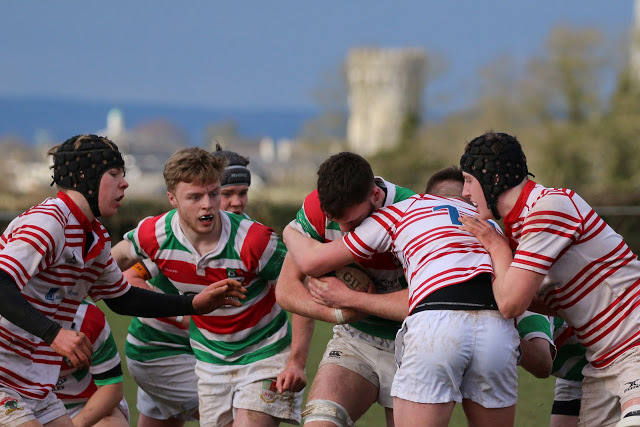 Nenagh Ormond under 18 squad continued their winning march through group 3 of the Munster Cup with a hard fought but decisive 26-12 home victory against much fancied Cork side Sundays Well.

With both teams going into this clash having won their opening three games and a quarter final place on offer for the winners, this game had the look of a close encounter with Nenagh perhaps slight favourites with home advantage and coming off the back of 7 straight wins in all competitions.

As usual, the home team were fast out of the blocks and were on the offensive quickly looking likely to score within the first couple of minutes only to be penalised for holding on just short of the line. The respite for Sundays Well was brief however and Nenagh were soon pressing for the game’s opening try which came on 7 minutes when flanker James Meagher drove over under the posts after sustained pressure to the delight of the home support.

Having been unbeaten to date this season, Sundays Well were not going to lie down after their early setback and soon showed that they were well capable of mixing it with their hosts, competing fiercely in the lineout and also at ruck time. Building into the game, the visitors put together numerous phases to create space out on the left on 15 minutes and broke through the normally resilient Nenagh defence to score with alarming ease, bringing the deficit back to 2 points.

Nenagh re-grouped well and two Conor McMahon penalties stretched their lead to 13-5 with 30 minutes on the clock. Two minutes later, flanker Cathal Ryan burst clear to score from a well-rehearsed lineout move just inside the Sundays Well 22 and Nenagh were now suddenly 13 points clear going into half time. Nenagh had to re-adjust in major fashion at the interval however, with injuries to flanker John Brislane and second row Eoghan Slevin forcing both off the field.

Sundays Well started the second half in determined fashion and were testing Nenagh’s defence to the limit. The home team had to re-organise once again when James Meagher was forced to leave the field and the visitors seized their opportunity, scoring under the posts when flanker Adam Brown forced his way over from a quickly taken penalty after sustained pressure.

It was clear from the reaction of the Sundays Well players and supporters that they now felt very much back in the game, with momentum seemingly swinging their way. Nenagh however had other ideas and responded immediately from the restart, working a good position on the 22 where substitute Tom Kennedy ran a great support line and deceived the covering defence for a superbly taken try.

Having shaken off the early setback and responded brilliantly, Nenagh now led 23-12 and the writing was very much on the wall for Sundays Well, who tried hard but could not break down the defiant home defence. Another penalty with 6 minutes remaining put Nenagh two scores clear and although surviving one or two scares towards the end, they held out their Cork opponents for whom this was their first defeat in 11 matches. Although clearly disappointed, Sundays Well could have no complaints about the result in what was an entertaining and thoroughly sporting contest.

Even though one more round of matches remains in this group, Nenagh have already secured top spot with victories over their principal rivals Sundays Well and Waterpark, who will fight it out for second place next week.

Next up for Nenagh is a visit to Young Munster for their final game in group 3 after which the draw will be made for the Munster Cup quarter finals scheduled for the weekend of 22nd / 23rd of February and which they will play on home turf.

Last Sunday our U15s made the short trip to Clarisford Pa...