U-16 Qualify for Munster Plate Final 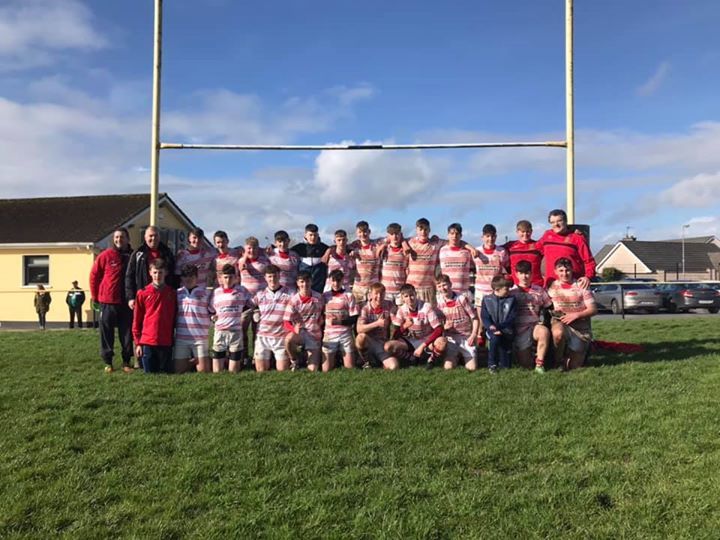 Nenagh Ormond qualified for the pan Munster Plate final in a wet and windy Abbeyfeale against a gallant Cocha Dhuibhne team. After storm Jorge the elements were challenging with a strong wind and tough underfoot conditions. Nenagh had the wind in their backs in the first half but were playing up the hill. From the start it was clear this would be a competitive battle, the rucks were fiercely contested and the tacking keen on both sides. Nenagh eventually made their way into the Corchaa Dhuibhne 22 on the back of a couple of penalties but the very windy conditions made the lineouts tricky and we coughed up a couple of good positions in the 22. Corcha Dhuibhne found it difficult to get out, with kicking into the wind providing Nenagh with a foothold in the opposition half and after a series of carries near the line Luke Conneally used his strength to dot the ball down for the opening try, the difficulty conversion was missed. Nenagh had to defend for a period and did well with some staunch defence from the centres Joseph Coffey and Alex Morrissey. There were some great carries by the pack especially from Luke and Tadhg O’Brien and we again carried hard and won a penalty and from an attacking lineout and a few rumbles by the forwards that man Tadhg O’Brien burst over near the posts and Joseph Gleesons conversion moved Nenagh to a 12 0 lead. With half time looming Nenagh didn’t control the kick off well and Corcha Dhuibhne had a spell of pressure and a clever kick to the corner looked very dangerous and good covering by Joseph Gleeson prevented a try but gave a lineout to Corcha Dhuibhne on our 5 metre line. As happened at the other end a great leap by Tadhg O’Brien disrupted the lineout and Luke Graham was able to kick to touch to leave the half time score at 12 0. With the wind in their backs in the second half Corcha Dhuibhne applied the pressure you would expect in a semi-final and the opposite was the case, Nenagh now struggled to get out of their half. Nenagh’s discipline started to creak and a succession of penalties keep the pressure on the boys. The pack were working hard to carry out of defence but at time there were offloads or extra passes that were not advisable in the conditions and the pressure continued. After a period of pressure a speculative kick to the corner from outside the 22 saw one of the Nenagh props outpaced and the ball was grounded in the top left hand corner for a try to the Kerry men. The difficult conversion was missed and the score was now 12 5, with lots of time on the clock. From the kick off there was a heavy clash and Mikey Doyle, who was having a fine game, went off injured and Ciaran Carey was introduced to the fray. Nenagh rallied and battled their way into the Corcha Dhuibhne 22 and from a scrum the ball reached Joseph Coffey who used his power to get over near the corner for an excellent try and a 17 5 lead. Again Corcha Dhuibhne came back and few penalties were conceded and with 10 minutes to go the flow of the game changed again. The Kerry men had a scrum on the Nenagh 22 and Luke Graham made an excellent tackle on the out half and regained his feet and won the ball and we were moved forward to the half way line and had a promising attacking position with extra numbers on the left hand side. However, the Corcha Dhuibhne no 13 gambled and read a long pass an intercepted and ran clear from halfway to score by the posts and the conversion left the score at 17 12 and the nerves were beginning to jangle. From looking reasonably comfortable it was a one score game again and with the elements in their backs the Corcha Dhuibhne tails were up. From the kick off Nenagh were able to apply pressure and keep their opposition in their half and with time almost up a loose pass went to ground and Luke Conneally was able to hack on and gleefully dive on the ball to secure the win for the gallant Nenagh boys. The difficult conversion into the wind was missed and was followed immediately by the final whistle, much to the joy of the travelling support. Considering this team did not win a single game at U12 and U13 level it was a tremendous achievement to reach the final, which will be on in Irish Independent park (Musgrave park) on Sunday March 22nd and a testimony to the hard work that has been put in with a lot of the team playing since they were U7. All the players played their part and the use of the bench was important but there were huge displays by Tadhg O’Brien and Luke Conneally in the back row and from captain Joe Shanahan. John Donovan was very solid at full back and the centre pairing carried well into the wind in the final 10 minutes when they were needed. Half backs Like Graham and Joseph Gleeson’s handling was outstanding in the tough and cold conditions and all the players played their part in a great battle. Nenagh were hosted by Corcha Dhuibhne on an U14 tour a couple of years ago and great credit must go to Paddy Fenton and this team on a very sporting contest, the result of which was in doubt until the final try, there were a credit to their club and county and it was great to hear the cupla focail being used by the men from West Kerry. The final will be a rematch against Douglas Carrigaline Dolphin on their home pitch and with nothing in the pool game earlier in the season it is sure to be a titanic contest.