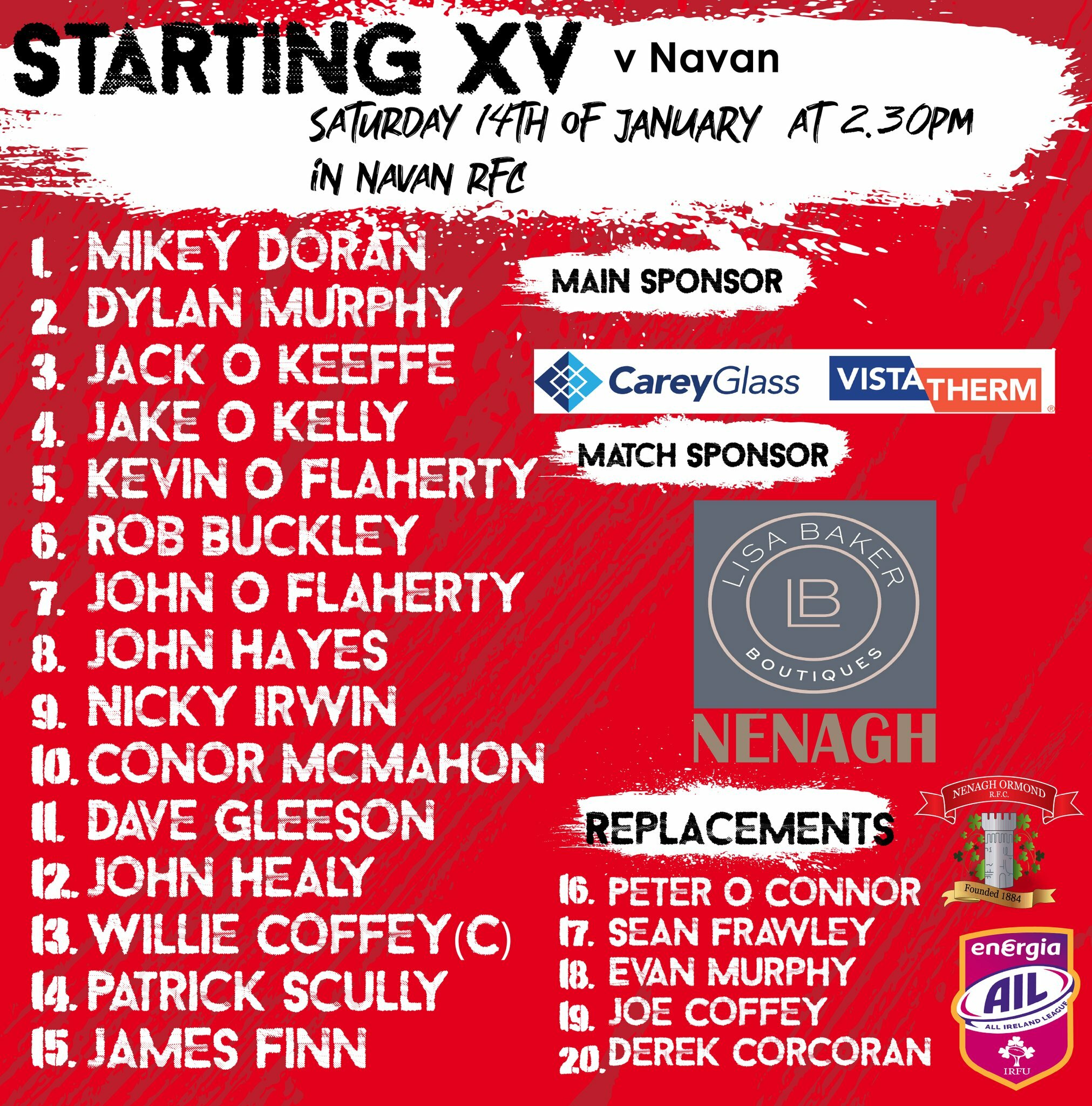 last Saturday for Round 10 of the Energia AIL. Unfortunately the heavens opened before the match.

Strong cross winds which would prove to be difficult for both kicking and lineouts were also a feature.

they were still reeling from the loss the week before. Some strong carries were met with some great

defence from Nenagh. Both teams found it difficult to utilise the wind which resulted in numerous

scrums throughout the first 30 minutes. Navan were endeavouring at all times to use the ball well and

played a lot of the first half inside the Nenagh half. The Nenagh men came up with some big turnovers in

lineouts from John O Flaherty and Jake Kelly which helped to relieve some pressure. After some

sustained Navan pressure though Mikey Doran was yellow carded for hands in a ruck. Navan kicked to

lineout and hold up the ball. Eventually though Navan worked the phases and utilised the extra man

when they bounced back blind to create a 2 v 1 where they scored in the corner.

conceding a penalty 10 metres from the line. Nenagh chose to go to the corner where the maul was

repelled by a good sack. They continued to build phases around the corner until a skirmish happened in

a breakdown which resulted in the Navan second row and Nenagh’s Davy Gleeson getting carded.

under the posts 5 metres out. Nenagh captain Willie Coffey chose to go with a 5 metre tap from which

Dylan Murphy found Kevin O Flaherty who powered over for a try converted by Conor McMahon. As

the game continued, a high tackle from John Healy resulted in yet another yellow card and it was 14 v

13 for the remainder of the half. Navan elected to scrum in midfield from the penalty and with an extra

man you would have expected they would try to utilise this. But from the scrum they kicked in behind

where Conor McMahon got back and touched down for a goal line restart. Nenagh were under the cosh

and were defending for the remainder of the first half. With Navan 5 metres out and carrying hard

only one man in however and targeted it, winning a penalty turnover to end the half 7-5.

The second half began with Navan trying to pin Nenagh back into their half. A mix of lineouts and scrums

were exchanged and both defences held firm. It was clear that this was going to be a tough game. As the

second half progressed Navan began to dominate the scrum. However Nenagh managed to muster up a

10-5. Navan were throwing everything at Nenagh in search of a home win. But the away men’s defence

was holding firm. Navan produced a vital turnover on the Nenagh defensive 5 metre line and put it

through the hands to their big number 8 who avoided some tackles and got over in the corner. With the

teams in defence made it look like a draw was inevitable. Navan managed a penalty in the dying minutes

but to the relief of the travelling Nenagh support the kick was missed. They ran the ball back from the

restart in search of another opportunity and got into a position for a last gasp drop goal. The drop goal

welcoming high flying Blackrock at home this weekend. Nenagh will be eager to right the wrongs from

most aspects of play a late score for the Dublin men took the spoils.

Kick off on Saturday is at 2.30pm in Lisatunny. All support is most welcome.