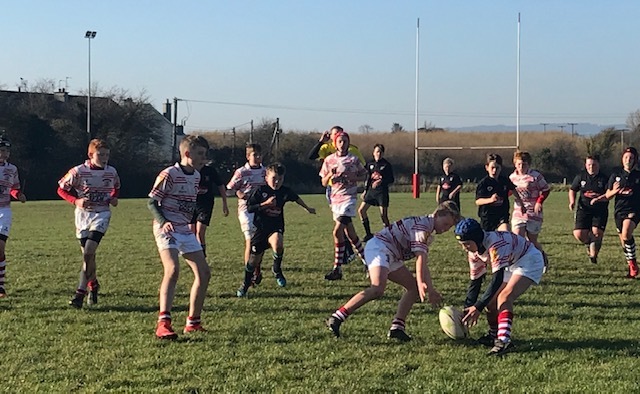 We played Young Munsters RFC on Sunday 18th November in Lisatunney in a friendly. On the day we were beaten 24 - 21 however this was a much improved performance against top quality Division 1 opposition. The day started poorly with the concession of 2 soft tries and the signs were ominous. However Nenagh rallied and Jack Macnamara ran hard at the Munsters defence and scored a fine try which was expertly converted by Zak Keller. This set us up nicely and following some quick hands and good passing by Sean Ryan, Mason Cawley scored in the corner. Up stepped Zak and unbelievably from the touchline he converted again. Sean Ryan who was dominating the exchanges on the wing then gathered his own ball and took off on a searing run scoring a great try under the posts which Zak duly converted . Going into the last few minutes with our noses ahead, thanks to Zaks expert kicking, however we conceded a late try that gave Munsters the hard fought win. This was our best performance of the season so far, our tackling was much improved and our passing etc was very sharp. On the day there were some fine performances from Tadgh Gleeson, Dylan Schweitnitz , Zak Keller, Jack Macnamara Sean Ryan and Fintan O Keefe. Congratulations to Cillian Ryan who has been appointed captain for the season. Special mention to Josh Morgan who deputised for the injured Mikey in the second row - Joshs recovery from serious illness, his determination to succeed and his courage on the field of play continues to amaze and inspire the coaches and team. Another shout to Ivan Strusia who made his debut and played very well. Our thanks to Munsters for coming out and to Robert for reffing the match. Best wishes to Mikey Morgan and Ruaidhri Kelly who are out injured at the moment. Next up is Old Crescent RFC in the league. Training continues Wednesday night at 7pm in Tyone- new players always welcome.