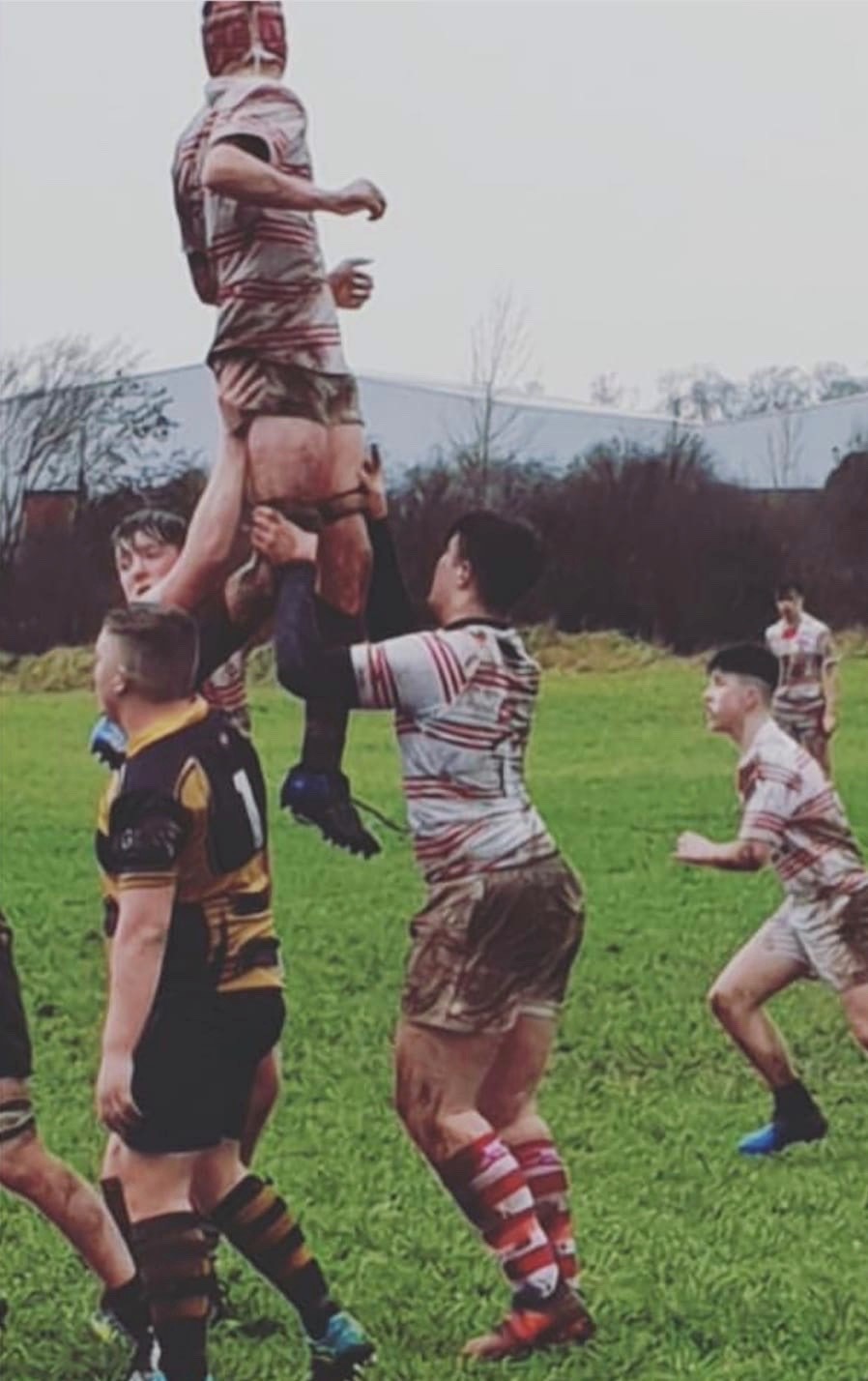 Nenagh Ormond Under 16s travelled to Derryknockane on Sunday to play Young Munster in the final round of Phase 1 of the Munster Club Competition. This season has seen players from UL Bohs, Ballina/Killaloe and Newport join the Nenagh lads at Under 16 which has given our numbers a boost as well as improving training and competition for places. However, with flu making its way through the squad and several injuries we had just five subs on the day with a number of those togged still recovering. Despite this, there was good concentration and determination from the warm up on and the lads brought this into the match.

The opening minutes saw both teams settling in and Nenagh had a good share of possession. However, they gave away a number of penalties which took the pressure off and allowed Young Munster to kick to touch and make their way down the pitch and into Nenagh’s 22. Their centre was quick to spot a gap in the defensive line which he sped through to touch down under the posts. The conversion went over to put the home side up by 7 points. Nenagh put it behind them quickly and when Young Munster got a defensive lineout in their own 22, John Brislane read the throw perfectly, getting up in front of their jumper and tapping the ball down for hooker Sean Fitzgerald to run on to. Fitzgerald reacted quickly and showed great pace and power to get past their winger for the try and bring the score back to 7-5.

Nenagh’s confidence was up after this and they began to take hold of the game with both forwards and backs showing great skill and support lines to keep the ball alive time after time. With the Young Munster defence scrambling in their own 22, scrumhalf Andrew Ferris had great vision to change direction and get the ball to Kieran Tinkler who took a good line at pace and cut through the defence to put Nenagh ahead by 10 points to 7.

Nenagh turned defence into attack for the next score when they pinned Young Munster in their own 22 with some great pressure, forcing them to kick down the pitch where fullback Adam Cleere was waiting. Cleere ran the ball back and used his excellent pace and footwork, backing himself all the way over the tryline. Adam Steed converted to put Nenagh ahead by 17 points to 7. However, the visitors were not to have it all their own way and Young Munster came back into the game just before half time, gaining a foothold deep in Nenagh’s 22. This time they kept the ball tight and eventually got over to leave the half time score at 12-17.

The Nenagh lads were composed at half time and, led by captain Eoghan Tighe, looked at both the positives from the first half and also what they needed to change. They were quick to make adjustments in the second half and began to really fight to both gain and hold possession. When Young Munster came on the attack just outside the Nenagh 22 they found themselves up against a brick wall and when they eventually kicked fullback Adam Cleere caught the ball and ran it back to just inside Young Munster’s half. The Nenagh support was in place fast, as was the defence. However, when Ferris came to the back of the ruck he quickly spotted that the blindside was not covered and he picked and raced down the touchline, beating two defenders to go over and run in under the posts. Steed converted to put Nenagh ahead by a healthy 12 points but soon after Young Munster scored to bring it back to 19-24. Young Munster had the majority of the possession in the final minutes but, credit to the Nenagh lads, they left nothing on the pitch and held out for the win.

After Sunday’s match it can definitely be said that the settling in period is well and truly over with the whole squad working well together and playing as a team. The entire pack, as well as replacements, worked tirelessly throughout with Tom Lillis and Aidan Fogarty putting in huge performances. The halfbacks controlled the game expertly and outside them the communication and decision making from our backs is much improved with centre Aaron Delahunty’s workrate standing out in particular.

We all send our best wishes for a speedy recovery to Arainn O’Sullivan who was injured during the match and many thanks to Young Munster for their help. Our Under 16s take a break next week before the North Munster League quarter final the following weekend. Training on Tuesdays & Fridays at 7pm in Tyone.