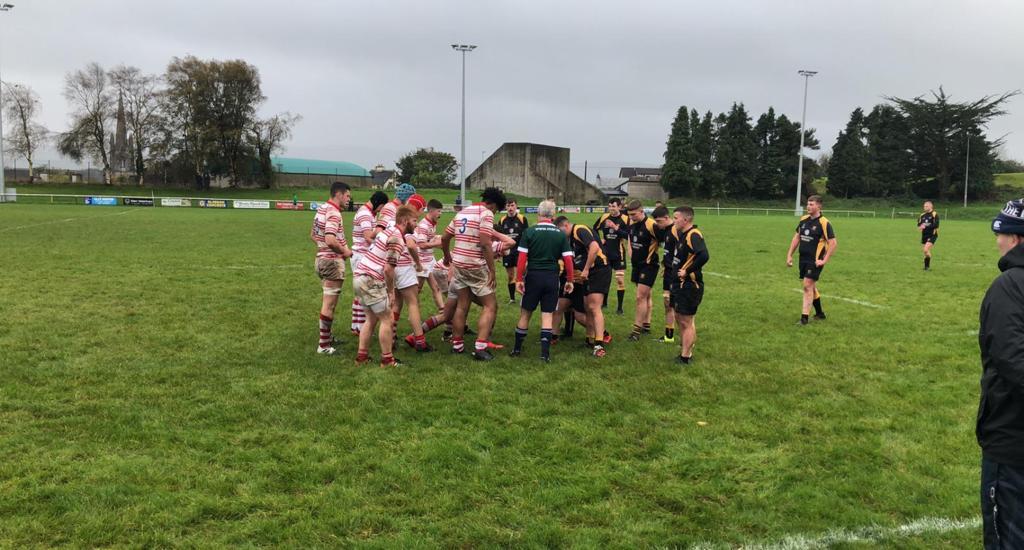 Nenagh Ormond U18.5s travelled to Tipperary Town on Sunday for their third match in this year’s Munster Club competition. Weather conditions were far from ideal with heavy rain and wind in the lead up to the game but fortunately the rain eased just as Nenagh came out to warm up.

Nenagh started well and the first quarter saw them dominate with two good tries. The first came when Clanwilliam kicked deep to fullback Mason Cawley who ran it back and popped it up to Joseph Gleeson. Gleeson found John Brislane who broke the line and made a strong run which took him inside the Clanwilliam half. When the home defence scrambled to catch him, Jack O’Flaherty was on hand to take the offload and sprint clear to score under the posts. Gleeson converted to put the visitors ahead by 7 points.

When the ball went dead from the kick off, the scrum back saw Brislane pick and again prove difficult to stop. He passed to centre Aaron Delahunty who made it well inside the opposition 22 before drawing the covering defence and passing back inside to Brislane who had followed up in support. Brislane touched the ball down to give Nenagh a 12 point lead.

After such a great start Nenagh were then guilty of easing off and Clanwilliam took advantage. They won several penalties and eventually a strong carry from close range took them over the try line. They converted to bring the gap back to just 5 points.

The Nenagh lads found it hard to go back up through the gears but Brislane showed his class again when he picked from another scrum and fought off several defenders before passing to Delahunty who raced down the touchline to score.

Although they had a 10 point lead at half time, Nenagh were not entirely happy with their performance and the first ten minutes after half time saw an increase in effort and intensity, helped by some fresh legs from the bench. When centre Alex Moloney spotted a gap in the defensive line he was quick to slip through and he then got the ball away well to Cawley whose break took Nenagh inside the home 22. Nenagh won a penalty and opted to take the kick which Gleeson slotted to keep the scoreboard ticking over.

Again after this Clanwilliam came back into the game and had some good periods of play. Nenagh also had a few chances, the closest when they got the ball out wide to Sean Ryan who showed great pace to break and make it to within a couple of metres of the line. The final score came when Brislane gathered the ball from a loose throw in the Clanwilliam lineout. He broke straight through and down the touchline. With several defenders scrambling to stop him, he dove from the five metre line and powered over.

The rain reappeared to make the final ten minutes of the game very tough going and hard work for both sides. Although they won well on the scoreboard, Nenagh identified plenty to work in the next couple of weeks before we welcome Bruff to New Ormond Park for the final match of  this phase.

Hi everyone, spread the word re Saturday’s game in New Or...

Our Under 9s travelled into Limerick on Sunday to play Sh...