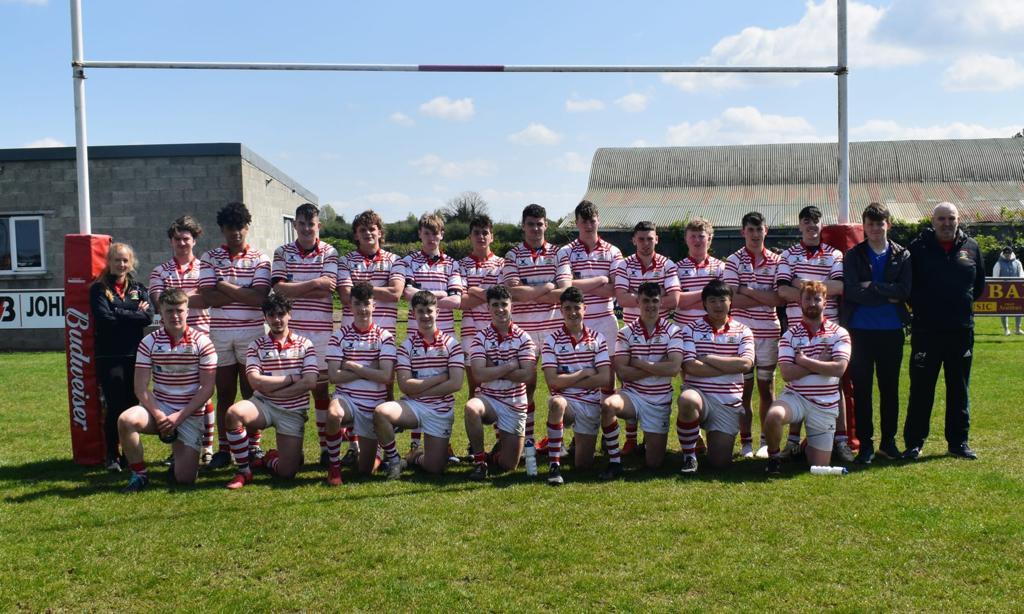 Nenagh Ormond U18.5s continued their North Munster Cup campaign with a home semi final against Young Munster on Sunday in Lisatunny.  In different groups for the Munster Club competition and on different sides of the draw in the League, the two teams last met in a preseason friendly back in late August.  Both teams competed in the Munster Club Cup this year and any time they meet it is always a tight contest so the Nenagh lads were ready for a challenge.

The opening quarter did not go Nenagh’s way with Young Munster competing well at ruck time and using the strong wind at their backs to kick for territory.  They scored inside the first ten minutes when they turned the ball over and managed to get it out wide where the Nenagh defence was scrambling.  The visitors added a second try at the end of the first quarter and converted to go 12 points up and Nenagh found themselves under pressure.  Then Nenagh got a lineout on the Young Munster 22 and, having secured the ball well, worked hard to take the play from touchline to touchline, stretching the defence and creating an overlap for Mason Cawley to put Jack O’Flaherty over in the corner.  This pulled the score back to 5-12 but a Young Munster penalty widened the gap to 10 points to leave the half time score at 5-15.

Nenagh knew they would have to use the wind to their advantage and tighten things up in the second half if they were to have any chance and, all credit to them, they went out determinedto get the job done.  All of the forwards really upped their game with Dylan Schweitnitz and Ivan Struzia supporting particularly well and John Brislane and Cillian Ryan making some important carries.  When they found themselves with an overlap around the middle of the pitch, second row Ryan showed great skill to fix the defender and get the ball to Alex Moloney who drew the last man and passed to O’Flaherty.  O’Flaherty sprinted to the 5 metreline before a long pass from Joseph Gleeson put the ball in the hands of Aaron Delahuntywho broke through to score.  Gleeson added the conversion and Nenagh were just 3 behind.

The next score came from a Nenagh scrum just inside the Young Munster 10 metre line.  A well worked move saw Moloney break the line, get the ball to Delahunty and continue in support for Delahunty to offload it back to him for the score.  Gleeson again added the extras to put Nenagh 19-15 ahead.  Young Munster came back fighting at the start of the final quarter and an unconverted try saw the lead change hands again before another move straight from the training ground saw Delahunty and Cawley combine before Moloney broke through and scored under the posts.  The conversion gave Nenagh a lead of 26-20 but with 10 minutes left they couldn’t afford to relax.

Young Munster went up through the gears and came at Nenagh with everything they had.  It looked ominous when a couple of penalties and some strong carries from the Limerick side gave them a foothold in the Nenagh 22 but when the ball went lose fullback Moloney was on it in a flash and he took off down the length of the pitch.  Young Munster chased hard but Moloney could not be caught and he scored under the posts to complete his hat trick.  Gleeson’s conversion left the final score at Nenagh Ormond 33-20 Young Munster.  Our U18.5s are now through to their second final of the season where they take on Ennis – details TBC.

Our Under 10s played in the Seapoint RFC 40th Rugby Festi...