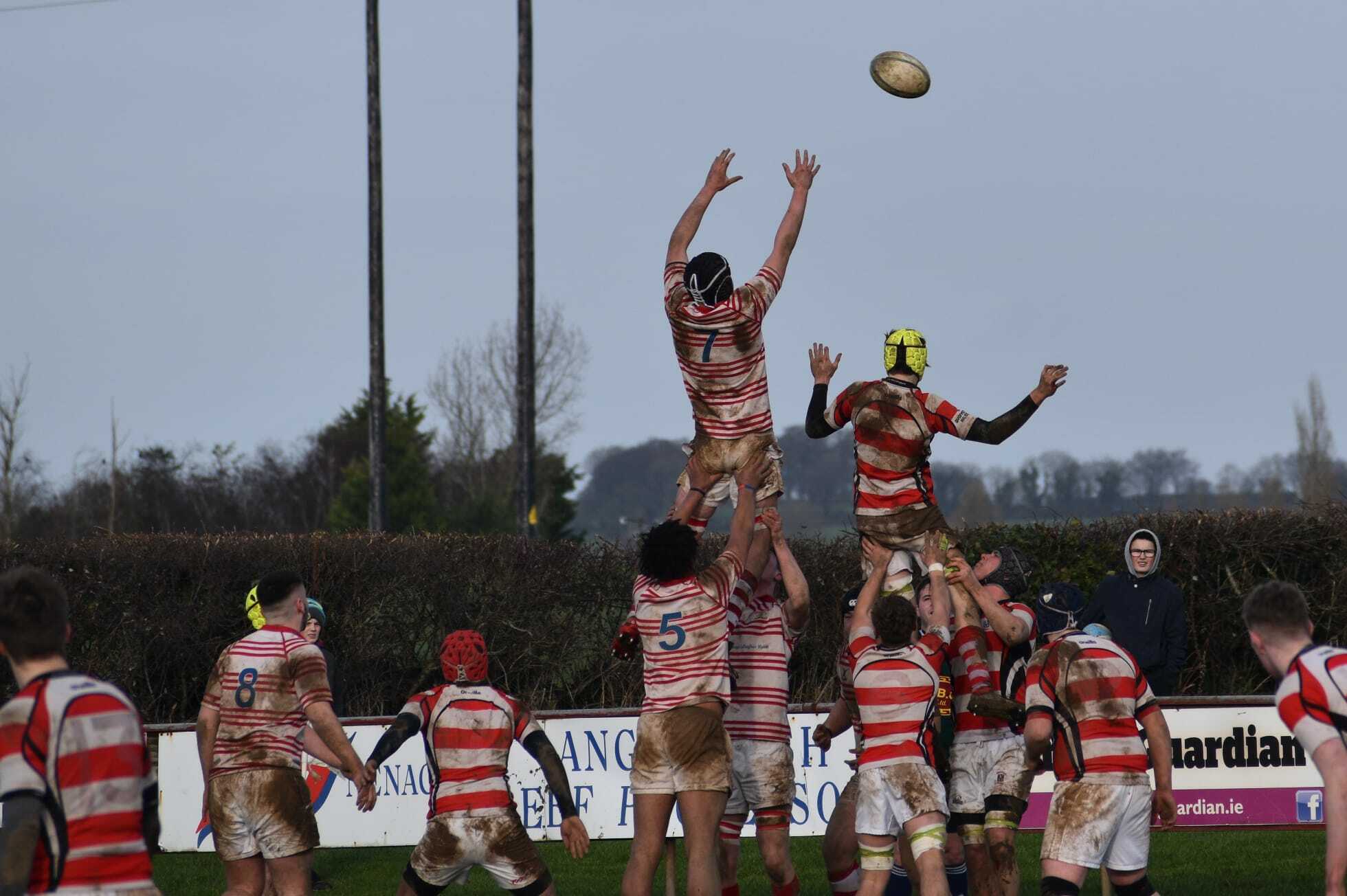 (Picture shows lineout action from the U18.5 game vs Skibereen in the Pan Munster Plate last Sunday)

Under 13: Nenagh Ormond under 13s made the trip to Dooradoyle last Sunday. Nenagh received the

drop off and started quite well. The ball was put through multiple phases and in an effort to move the

ball wide, the ball went to ground and a Garryowen player pounced on the ball and ran from deep to

score a try. Garryowen then scored a further try when Nenagh, having been camped on their own try

line, looked like holding them out but eventually the pressure told and they got over for their second

converted try. Nenagh showed great character to score the next try after being under pressure from the

start. There were some brilliant carries by Anluan White , Scott Powell, Sean Ryan and Aidan Stead to

get Nenagh on the Garryowen 5m line. After numerous penalties the referee lost his patience and

awarded a penalty try. Garryowen were next to score with another long range try, their 13 got the ball

from deep and with Nenagh defenders very slow coming up he rounded the defence of dot down. The

half time score was 19-7. Nenagh had the hill at their backs for the second half and started very well.

Nenagh regained the kick off and after multiple phases found themselves on the Garryowen 5m line.

The defence was a lot more disciplined so Nenagh had to be very patient and work through the phases.

After countless rucks Scott Powell picked at the base and burrowed his way over the line. Oisin Hogan

added the extras. Nenagh kept the momentum going from the kick off and held onto the ball very well.

Again there were good carries from Joe Fahy, Shane Gleeson, Aidan Stead and Scott Powell. As the ball

to round the defense and score. The conversion was missed to leave game 19 all. The next 5 mins was a

ding dong battle with Nenagh forwards doing exceptionally well. The ball was being carried with great

intent, with good ground being made. Unfortunately after all of Nenagh’s hard work, Garryowen scored

3 tries in a row. The Nenagh defence was quite slow in closing down the space and allowed the

opposition to gain momentum, from which they capitalised. Nenagh showed great character to score

another try. Freddie Mitchell made a brilliant run and made yards which he shouldn’t have. Joe Fahy

carried at the next ruck and then Shaun Murphy at the following one to power his way over the line.

The final score ended up 38-26 to Garryowen. Nenagh played very well in patches but allowed

Garryowen too much space which they then capitalised on. Oisin Hogan made 3 try saving tackles, a

testament to his efforts and Scott Powell worked and carried brilliantly all game. Training continues

Wednesday evening at the usual time.

Under 16: Nenagh continued their winning ways with a good win under lights in Lisatunny on Friday

night last. Conditions were very difficult with driving wind and rain blowing across the pitch for most of

thankful for the shelter of the stand on the night.

The home side attacked from the off and camped in the opposition 22. Some good defence kept the

Nenagh attackers out before the defence was breached on eight minutes. Centre, Shane Cleary

take a pop pass and touch down in the corner. The difficult conversion was unsuccessful.

Next up it was the turn of the forwards with Ryan Gratton, celebrating his call-up to the Munster under

16 Development panel, running in from 40 metres for a great score.

Ennis sought to get a foothold in opposition territory with some clever kicking from their outhalf. After

sustained pressure they managed to get in for a good try just before the break. The score at half time

Nenagh started the second half as they did the first. Some excellent handling by the backs off first phase

try-scoring rate. Ennis kept in the fight and their big runners began to gain yardage. They were rewarded

Man of the match was Nathan Mannion who gave a fine display of tackling from the openside. Jamie

kept things moving nicely from the base in very difficult conditions.

We play Waterpark next Sunday in the next game in the Pan-Munster competition. Kick-off is 12.30 in

the U.L. 4G pitch. Training continues on Tuesday and Friday night. After training on Tuesday night the

panel will have a presentation on Nutrition from Senior team S. & C. Coach, Colm Skehan.

Under 18.5: Nenagh U18.5 team continued their Pan Munster plate competition campaign with a home

game in a cold but dry Lisatunny on Sunday. Nenagh kicked off towards the town end and started well

with some good phase play in the early stages. A penalty kicked to the corner allowed the lineout to

provide the platform for Dylan Crowe to score out wide, the conversion was missed. After 10 minutes

release their centre on the left wing to equalise with the conversion was missed. Nenagh continued to

to allow Niki Nie to score another unconverted try after 20 minutes. The half finished like that with

carrying too high. The score remained 10-5 at the short whistle.

The second half continued in a similar manner with play around the middle third until in the 11th minute.

Nenagh had a yellow card for a tip tackle, a big worry for the coaching team as it was the 4th such card

competitions. After we were restored to 15, the game was in the balance and Jack O’Callaghan stepped

up with a break up the middle from his own half. He kicked past the full back and won the chase to score

a super individual try on 25 minutes. Diarmuid Coleman slotted the conversion to give the side some

breathing space. A few minutes later Mason Cawley kicked ahead and was held back. The referee gave a

penalty try to leave the score 29-5, with a yellow to the Skibereen player for the infringement. On 30

minutes a great burst by Luke Grey saw him score wide on the right for another unconverted try.

leave the final score 29-10 to the home team. With three of the starting pack out with sickness, we were

pleased with the performance of the team, especially at lineout time where Sam Lancaster and Dylan

Doris dominated. The backs played well in patches, but were guilty of kicking away possession at times

and not making simple passes with a bit too much individualistic play. There is definitely lots of ability

and threats aplenty there if the team work can click. Nickie Nie returning from injury had a very good

game and the back row of Sam, Jack and Mikey were industrious. A huge game awaits next Sunday

when we play unbeaten Shannon in the next round, a game that doubles up as a North Munster league

Semi Final, so full attendance at training and big performance next Sunday will be vital.